The Northern Rivers region covers approximately 25,000 square kilometres of the far northeast corner of New South Wales.  The coastal areas of the region depend economically on the large influx of visitors during holiday seasons.  The inland area is predominantly agricultural.  There are approximately 425 towns in the region, but relatively few towns with a population of more than 5000 people.  Some of the towns located in the region include Lismore, Grafton, Byron Bay, Ballina, Casino, Murwillumbah, Kyogle, Bonalbo, Urbenville, Coraki, Evans Head, Alstonville, Maclean, Iluka, Yamba, Woodburn and Mullumbimby.

The area has a sub-tropical climate with an outdoor lifestyle and natural attractions.  There are pristine surf beaches, unspoilt rainforests, rugged headlands and sheltered bays. Six of Australia’s precious World Heritage Listed areas can be found here, as well as dozens of smaller parks, nature reserves and state forests.  The region’s cultural mix has produced a vibrant and exuberant regional identity, with thriving visual and performing arts communities and numerous fetes, markets and festivals.

The Northern Rivers has a higher proportion of children (less than 14 years) and aged people (over 65) than the rest of New South Wales.  It is expected to have a strong population growth  in the 70 plus age group as its popularity as a retirement destination increases.  Indigenous peoples make up a greater proportion of the population (2.6%) than for New South Wales as a whole (1.7%) and compared to the rest of the state, the area has a relatively small percentage of people from non-English speaking backgrounds.

According to the Australian Bureau of Statistics, the Northern Rivers region has a lower socio-economic status than for New South Wales as a whole.  One of the main reasons for this is the high unemployment rate. 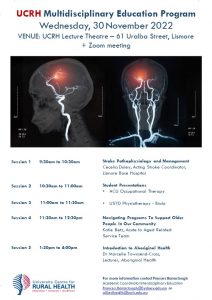 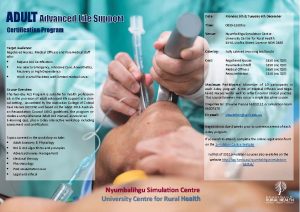 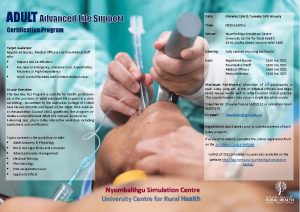 Course Overview This two-day ALS Program is suitable for health professionals in the provision of adult advanced life support in a clinical setting. Accredited by the Australian College of Critical Care Nurses (ACCCN) and based on the latest 2016 Australian Resuscitation Council (ARC) guidelines, the...
View Calendar
Add